Netball teams were placed into two sections with the top 2 progressing to the semi-finals. Young leaders who had achieved the young netball organiser’s award put their skills to the test with some officiating and scoring. The young leaders were also mentored under the supervision of volunteers from the Staffordshire County Netball Association.

The fixtures progressed, showcasing the counties best netball talent. The atmosphere was great with lots of smiling, supporting and clapping coming from the sidelines and viewing balcony.

Once the fixtures had finished it was then time to add up the scores. There were some very close matches with the winners and runners-up in section B only being decided by 1 point! 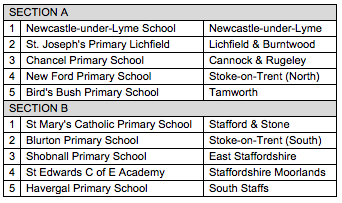 The final positions were then named and teams were presented with certificates, which also included ‘Man of the Match’ and ‘Girl of the Games’. Some school teams showed great sportsmanship and stayed to watch and cheer on the other teams still competing in the festival.

The High Five Final was a close battle, both teams very tired after the long day of netball and both striving to win the competition. Newcastle took an early lead and continued to up their pace until half time. St Joseph’s struggled under pressure to score the goals. The final whistle went to crown Newcastle under Lyme Junior School as champions winning the final 6-1

WINNERS: NEWCASTLE UNDER LYME JUNIOR SCHOOL from the Newcastle Partnership

A huge thank you to –